You guys are in for a treat in today’s guest post about Being Brave!  Meet my new friend, Melinda Mattson, another writer friend and For the Love sister.  She is a great writer; funny, insightful and real. Reading her blog, Savoring the Present and Whatever is Lovely, brings back wonderful memories for me because she has two of the most beautiful, funny, delightful little girls you have ever seen.  Many of her posts highlight tales from the parenting trenches and the challenges and joys that are part of the journey.

You are going to love this story about what it means to be a brave mommy.  It was originally published on her blog on Columbus Day. Her Ainsley reminds me of a certain little girl who used to live in my house and I might have laughed out loud and cried big fat tears when I first read this sweet story.  Enjoy!

Thanks for the day off from school, Columbus. Though it was a holiday the day was not without struggle. Our trials were likely not as difficult as sailing by night and sailing by day using only the stars to guide our way. But alas, the waters were a wee choppy for us today on our tender vessel.

I was glad to let the girls stay up past their bedtime last night. Though I thought we’d be up just a bit later, it turned out to be ten o’clock before we turned the lights out. This is late for us but I figured we’d make up for it this morning when we could sleep in as late as we wanted. That was until 6:16am when I heard the thunderous sound of galloping girls coming down the stairs and into our bedroom.

It was Emerson who spoke first, “The alarm is going off in our room!” I was fogged over with unfinished dreams and interrupted REM so it took more than a few seconds for me to register that I had to actually get up out of the bed to figure out what the matter was. Once I had padded up the stairs I heard the unmistakable beeping of the clock radio docking station that sits on Em’s dresser.

The odd thing is we never set this alarm in the girls’ room because it’s the girls’ room. Did I mention they’re in there? We want them to sleep. When they do have to get up for school Dirk does the waking so they didn’t even know there was an alarm in their room let alone how to turn it off. I have no idea how it got set but I’m reasonably sure it was Satan’s doing. Though we tried a good plenty, none of us could get back to sleep after turning it off so the day started with all of us in a deficit.

Ainsley may as well wear a sticker on her forehead that reads “I am tired” on the days when she is. Every little button on her tenderness is ripe for the pushing. After playing outside with friends she burst through the front door with a wail. “She took it! Right from my hands she took it from me!” She exclaimed as though she had just been presented with Sophie’s Choice and was aghast at what had been stolen from her. When I asked what the “it” was that had been taken I learned that it was a piece of grass that her dearest friend had taken away. Of course. This explains everything. Guessing I’d misheard I asked (as seriously as I could) “She took a piece of grass from you?” “Yes! And it wasn’t just any grass. It was long and wavy and looked like hay and I wanted it for Lady.” For Lady, you see, is a plastic horse. Of course.

We recovered from this disastrous injustice only to find that the peace offering Popsicle offered by her little friend had fallen sugar side down into the dirt. Seriously. You can’t make this stuff up. I rinsed it off and Ainsley, before heading back out, put her little face just inches before mine and asked “Does it look like there were tears here?” “No, baby, you look brave,” I told her, and out the door she went.

This afternoon I had a quick errand to run and Ainsley’s little friend came along. This is not uncommon, we just tote along other little people to do our business and everyone seems the happier for it. On the way home I was feeling particularly magnanimous so I made a stop at the McDonald’s drive through. Ainsley opted to order a Happy Meal because she was desperately hoping for a particular toy featured this week.  She also desperately wanted ice cream which was the treat her friend had chosen. I wasn’t wild about her getting multiple nutrition-less offerings so my compromise was that I would order a snack size ice cream treat that we could share and she could get the Happy Meal. Not sure why it seemed better to me if I also ate some of the junk. After being handed the bag at the window I quickly pulled out the toy and noted that it was not the little pair of Monster glasses she was hoping for. I surprised myself by asking the clerk if he’d be willing to swap out for the glasses. He replied, (like a manna offering from heaven) that he happily would. All was right with the world and the car was a-buzz with ice cream oohs and ahhs and the appreciation of a new plastic toy. Glory be.

The girls opted to go outside with their treats and have a picnic which seemed benign enough until, just moments later, the door flung open again and instead of a wail I heard more of a blood curdling shriek that caused me to bolt straight to the entry in two giant steps. I was sure I’d find a mountain lion attached to Ainsley’s leg, mouth clenched around her little quadricep. But instead she stood alone with ice cream dripping down every side of her head in a rather comical I love Lucy fashion. “What on earth happened?” was all that I could. She explained that she wanted to show her friend how she could balance the cup on her head and well, yea, she couldn’t do that. Of course. That explained everything.

Now when someone has melted ice cream on every side of their head and their hair is as thick as an alpaca, a bath or shower is the next stop to be sure. Except for the fact that Ainsley likes both of these things as much as a tooth extraction even when she is well rested. Imagine my delight at getting to encourage her into the bathtub in her narcoleptic state. Good times! When the water ran over her head (as she stood in the tub) she wept and wailed as though I was forcing the ice bucket challenge upon her in the North Pole.

It was too much. I’d had it with the drama and the over-reactions and the outbursts of raw emotion. I knew it was unreasonable for her to behave this way and that some responsible adult should step right in and explain to her that (tired or not), this all had to stop. But darned if there wasn’t anyone there but me. Huh. It still (nine years later!) amazes me that I’m the one who’s supposed to come up with the well-chosen words, the timely response, the pulled-together plan.

I had no inspiration to share and said nothing. I watched the water run down her supple spine and round bottom. Her perfect little form wet and slippery. She is such a miracle to me. And somehow that is what I saw in her. Not a wailing child but rather a reflection of God’s glory. I scrubbed her hair and rinsed out the suds and said nothing to her as she protested. I carefully lifted her out of the tub and onto the fluffy mat, wrapped her in a towel and hugged her to my chest. Her wet head lay on my shoulder and she quietly cried. The girl was tired. Dog tired. Me too. I put my face close to hers and reminded her what a good listener she is. How careful she is with her friends and how glad it makes me when she obeys the first time without complaint. I reminded her that I expect a lot of her because I know she is capable of a lot and that it’s not okay for her to raise her voice and stomp about. Through her tears she apologized to me and I gladly accepted.

This time after we wiped her tears away she did not ask me if it looked like there had been any tears there so I didn’t have the chance to tell her that it did not. But the truth is, she absolutely looked brave and so did I. Gentleness is such a force. Meekness, such a strength. I don’t walk it out well and beautifully every moment and have come unwound more times that I’d like to recount. But when I stop and quiet myself and see the beauty before me, I feel the strongest I’ve ever felt. It is the harder path, the choppier sea, but it is the far better course. The strength in self-restraint is mighty and magnificent and we’re all so brave for giving it a go. So to Columbus and all weary travelers I raise my glass to a brave new world indeed.

By prevailing over all obstacles and distractions, one may unfailingly arrive at his chosen goal or destination.   ~Christopher Columbus 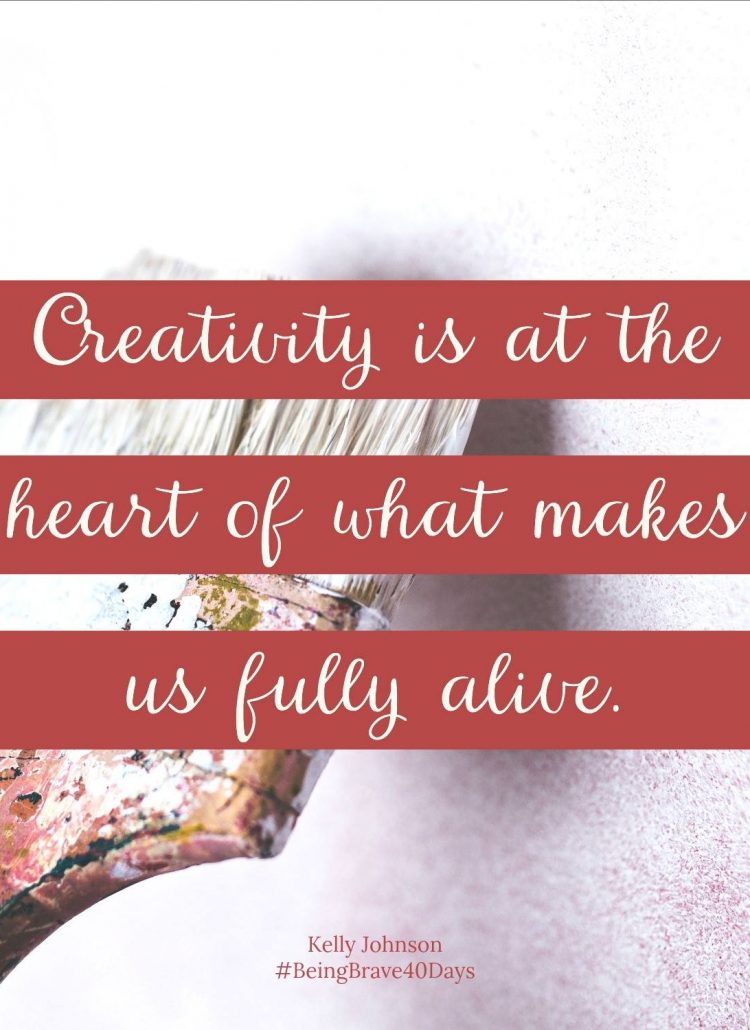 The Power of Wanting More
A Work in Progress
Being Brave Retreat Registration Open!